Look no further to learn our recommendations regarding how to choose the best caliber for an African safari hunt.

It has been often said that “there is no such thing as a free lunch,” and nowhere is this more true with rifle calibers. Power and accuracy are essential attributes in a rifle caliber for a successful and ethical hunt. However, as power increases, the felt recoil and muzzle blast usually increase correspondingly. This typically will reduce the accuracy a shooter can reasonably expect to obtain, especially when shooting a light rifle that is pleasant to carry on a long hunt. 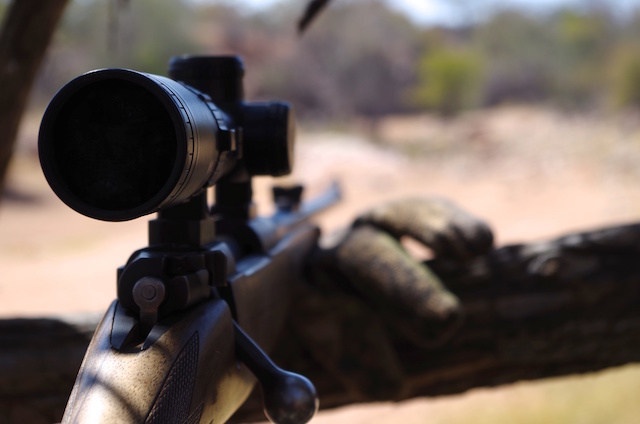 A .600 Nitro has more than enough power to easily take down even the largest bull elephants, but this is absolutely worthless is the hunter is afraid of the rifle and cannot shoot it accurately. As a result, you must make a compromise when it comes to power and choose a caliber that is powerful enough to ethically take the species you will be hunting, yet one that you can shoot accurately. After all, a properly placed shot from a lighter caliber is typically much more effective than 2-3 (or more) poorly placed shots from a more powerful caliber.

Generally speaking, the .270 Winchester is the minimum caliber suitable (and legal) for most species of plains game like impala and springbok. When using good quality bullets, the .270 (and similar cartridges like the 7mm Remington Magnum) is perfectly capable of taking some larger antelope as well.

However, the .30-06 Springfield is probably the best all-around caliber for hunting plains game in Africa. When using premium 180gr (or heavier) bullets, the .30-06 is powerful enough to ethically take virtually every species of plains game proper shot placement. It is also an excellent choice for hunting thin skinned dangerous game like leopard. At the same time, the .30-06 Springfield has a relatively mild recoil, has a trajectory suitable for taking shots out to several hundred yards, and most hunters can shoot it accurately. The same could be said about the .308 Winchester.

More powerful, higher velocity, calibers such as the .300 Winchester Magnum, the 8mm Remington Magnum, or the .338 Winchester Magnum certainly have their place in Africa, especially for longer range shots or on really big species of plains game like eland. The drawback of these cartridges is the fact that they have more recoil and muzzle blast than lower velocity calibers like the .30-06 Springfield.

However, if you can shoot them accurately, any of them will perform very well on a wide variety of African species of plains game. So, if you’ve got a .300 Win Mag, .300 Ultra Mag, or similar rifle that you shoot well and are comfortable with, by all means take it with you to Africa.


If you are planning on hunting a thick skinned member of the Big 5, such as buffalo or elephant, the .375 H&H is probably the best cartridge for the job. It is powerful enough to ethically take any species of game and thousands of hunters have enjoyed great success in hunting buffalo and elephant with the mighty .375 H&H. While it does have noticeably more recoil than a .30-06, the recoil is not excessive and should be manageable for most hunters. In fact, due to the effectiveness and relatively mild recoil (at least compared to the other dangerous game calibers) of the .375 H&H, the cartridge is routinely used by hunters for both plains game and dangerous game on safari.

The 9.3x62mm Mauser and the .375 Ruger are also very capable medium bore cartridges and can also be counted on during a dangerous game hunting safari in Africa. However, keep in mind that some countries have a .375 caliber minimum for dangerous game hunting, which means the 9.3x62mm (.366 caliber) would not be legal in those countries. For instance, Botswana, Tanzania, and most provinces of South Africa have a .375 caliber minimum. On the other hand, Zimbabwe has a 9.2mm minimum and countries like Mozambique do not have a minimum caliber at all.

There is also nothing wrong with going with a bigger cartridge like the .416 Rigby, .458 Winchester Magnum, .458 Lott, or even the massive .577 Nitro. These cartridges are all much better suited for elephant hunting or following up a wounded buffalo than the .375 H&H, which is why they are so popular among Professional Hunters specializing in dangerous game. However, their increased power comes with more recoil, reduced magazine capacity, and a heavier rifle.

No matter which cartridge you choose for your hunt, we highly recommend you use premium quality, heavy for caliber bullets. Don’t skimp on ammunition. Remember: the bullet is what actually kills the animal and even the best caliber for an African safari hunt may not perform well if poor quality bullets are used.

The typical bullets designed for hunting whitetail deer generally expand too rapidly and do not penetrate deeply enough for hunting in Africa. Luckily, there are lots of great bullets on the market that will work very well on African game like the Nosler Partition, Swift A-Frame, Hornady DGX/DGS, Barnes X, etc.

When selecting the best caliber for your African safari hunt, try not to get caught up in the hype about the individual calibers. The “best” caliber is the most powerful one that you can accurately shoot. While choosing the right caliber is important, placing your shots accurately is even more vital.

The best advice I can give you is to spend less time trying to find the perfect caliber and spend more time practicing your shooting under realistic conditions. The difference between most of the major calibers is not as great as it is sometimes made out to be and the animal will never know the difference if your shot is placed in the right spot.

I’ll say it another way: the best caliber for an African safari hunt is one that you shoot well and are comfortable with.

If you have questions on how to choose the best caliber for an African safari hunt with us, please contact us and we’ll be happy to answer your questions.