Why should I go Bushpig hunting with you? If you book with us, you’ll have the opportunity to hunt Bushpig in South Africa’s Limpopo Province. Both of these areas are located right in the heart of some of the best Bushpig habitat in all of southern Africa. We also have a proven track record of success on Bushpig hunts that few other outfitters can match.

For these reasons, we have high success rates on our Bushpig hunting safaris and our hunters take some incredible Bushpig each year. We can offer a good chance at taking a Bushpig with a beautiful red coat or with large, impressive tusks.

Additionally, by booking with us, you’ll enjoy a truly authentic African safari with exceptional personal service. We do not use outside PHs and we only book one hunting party at a time, so you’ll have exclusive use of the hunting area during your trip.

Due to all of these factors, we can provide an incredible Bushpig hunting experience unlike what you’re likely to find anywhere else in Africa. If you’ve always wanted to hunt the elusive and crafty Bushpig in the thick bushveld of southern Africa, then you need to book one of our Bushpig hunts. 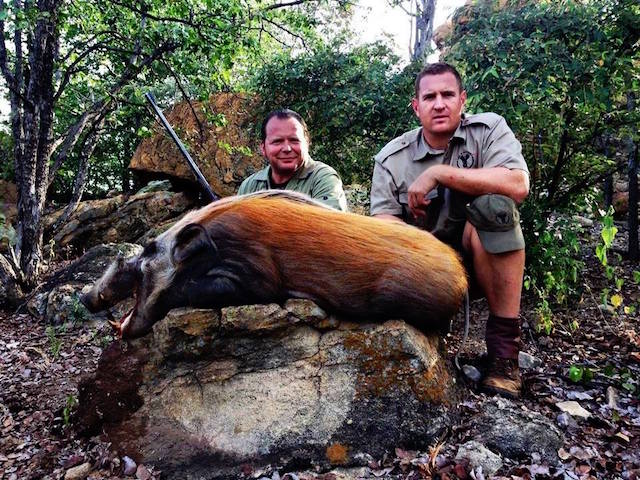 What methods do you use when Bushpig hunting? Bushpigs are normally nocturnal animals, so they can be difficult to hunt. Every now and then they are encountered by chance when hunting another species. However, the vast majority of our Bushpig hunting is conducted using hounds or over bait at night.

Baiting is a pretty simple proposition: we set up a bait in an area that they are known to frequent and sit in a blind overlooking the bait waiting for the Bushpigs to appear. In this case, the Bushpig hunting can be very tedious, involving sitting absolutely still for several hours until the Bushpig finally hit the bait. However, shots are normally on a stationary animal at a known distance.

In the case of hunting Bushpigs using hounds, things get a lot more interesting. We will get a pack of hounds and send them into an area where we think the Bushpigs might be sleeping during the day. The hunters are then stationed along likely routes of escape for the Bushpigs.

How much does it cost to go Bushpig hunting in South Africa with you? For the 2022 hunting season, our trophy fee for Bushpig is $575. This includes all baiting costs for your Bushpig hunting safari. If you are interested in going Bushpig hunting using hounds, contact us for more information and the most up to date prices.

When is the best time of year for Bushpig hunting in South Africa? Bushpigs may be hunted virtually all year round. However, hunting Bushpigs using bait usually works best during June through October, when the farmers in the surrounding areas do not have standing crops in their fields for the Bushpigs to feed on. Hounds may be used successfully during entire year, though we tend to use them most from October through May.

What is your average trophy size of Bushpig taken in South Africa when hunting with you? Our average Bushpig has 3-4″ long tusks. The largest Bushpig we have ever had a client take with us had tusks that measured over 5 1/2″ long, which is an incredible Bushpig trophy. This particular Bushpig is the one in the photo at the top of this page and you can see a close up photo of its tusks below. 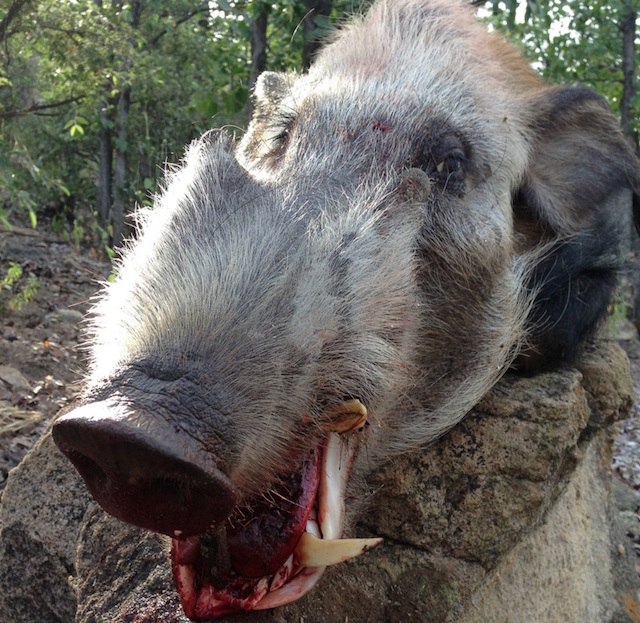 Contact us today to book your Bushpig hunting safari in South Africa.

What is the best rifle caliber for Bushpig hunting? Pound for pound, Bushpig are pretty tough animals. Bushpig can be quite dangerous if injured or cornered, so it is essential to use “enough gun” in order to avoid having to follow up a wounded Bushpig.

With this in mind, we do not recommend using anything less than a .308 Winchester loaded with premium 180gr bullets for Bushpig hunting. The .30-06 Springfield, .300 Winchester Magnum, and even the .375 H&H are all excellent choices for hunting Bushpig.

What is the best recommended Bushpig shot placement? Though Bushpig are very tough animals, they will not run very far if hit properly by a powerful enough bullet. When the animal is standing broadside, simply aim at the center of the shoulder, approximately one third of the way up the body.

How do you distinguish males from females when Bushpig hunting? Male and female Bushpigs are similar in appearance and can be difficult to tell apart when when Bushpig hunting. Both males and females have tusks. However, males are usually noticeably bigger in the body and have “warts” on their face, which females lack. Females will also often be in the company of piglets.

If you’re interested in going Bushpig hunting in South Africa with us, please contact us. We’ll get back to you as soon as possible, usually within 24 hours. 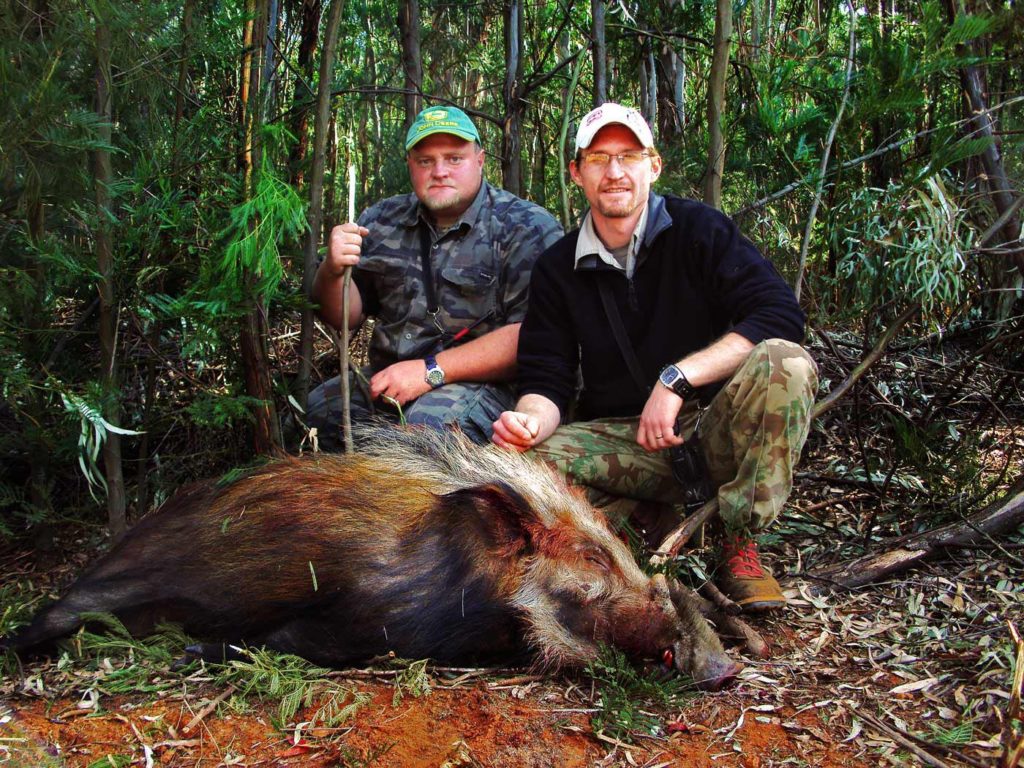 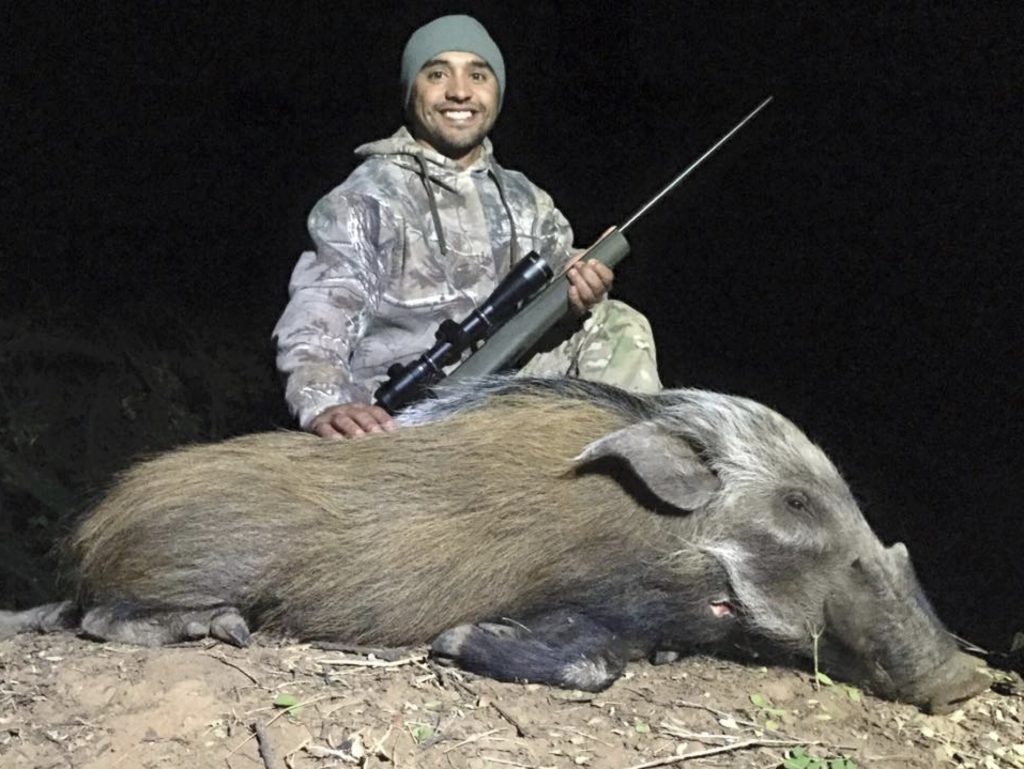 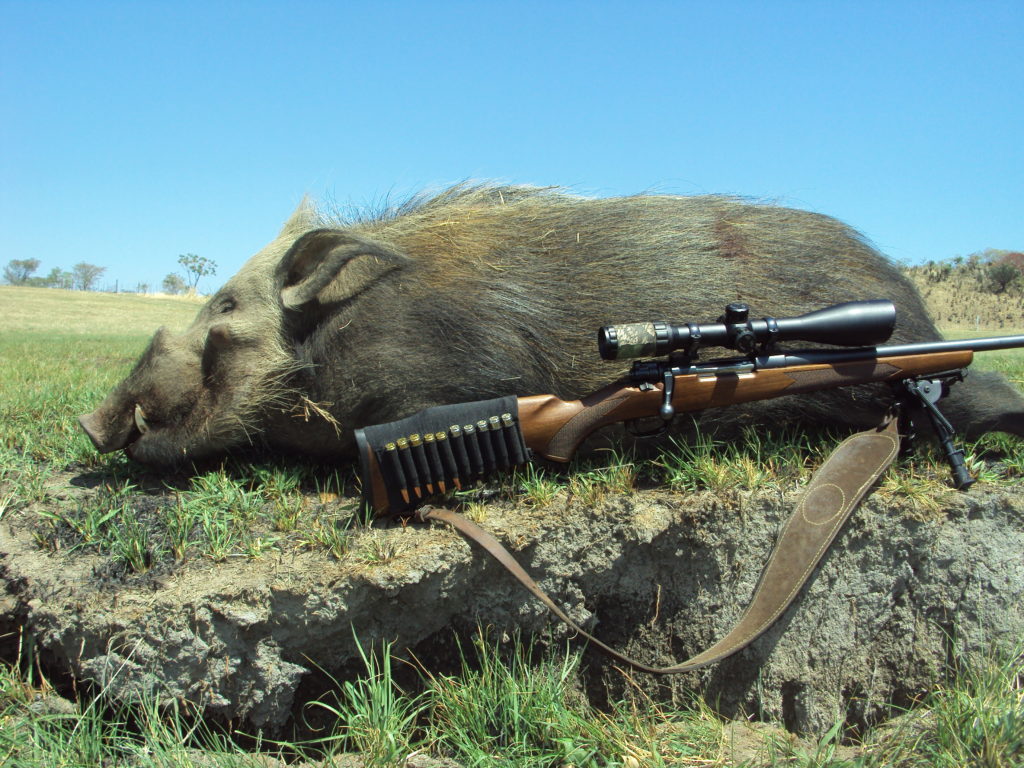 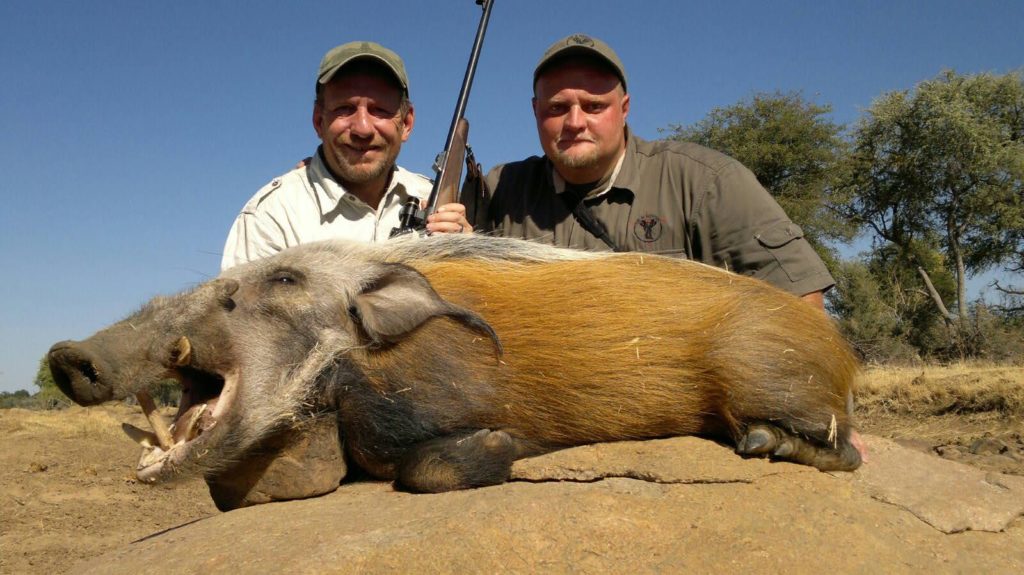 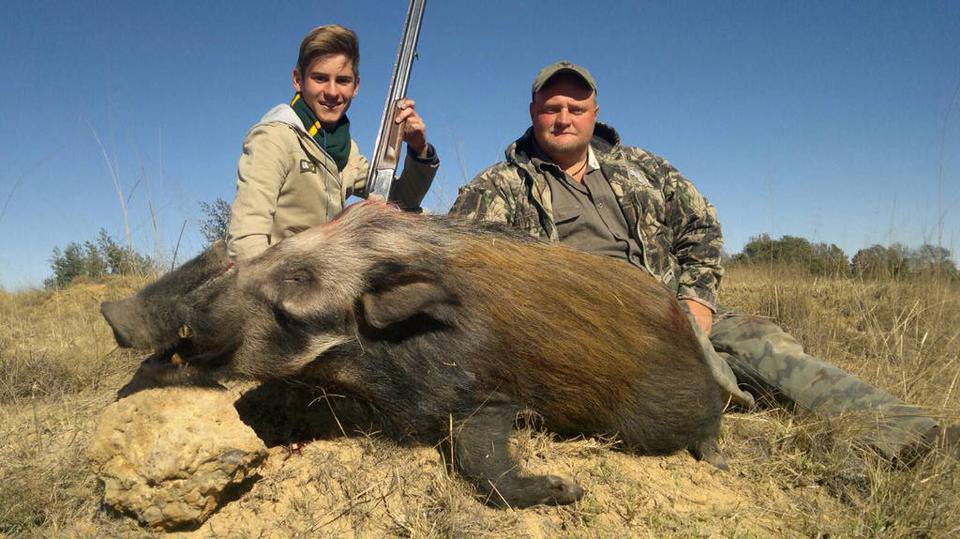 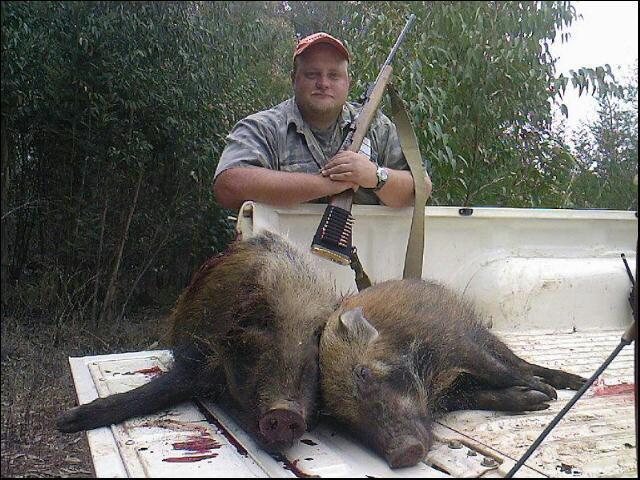 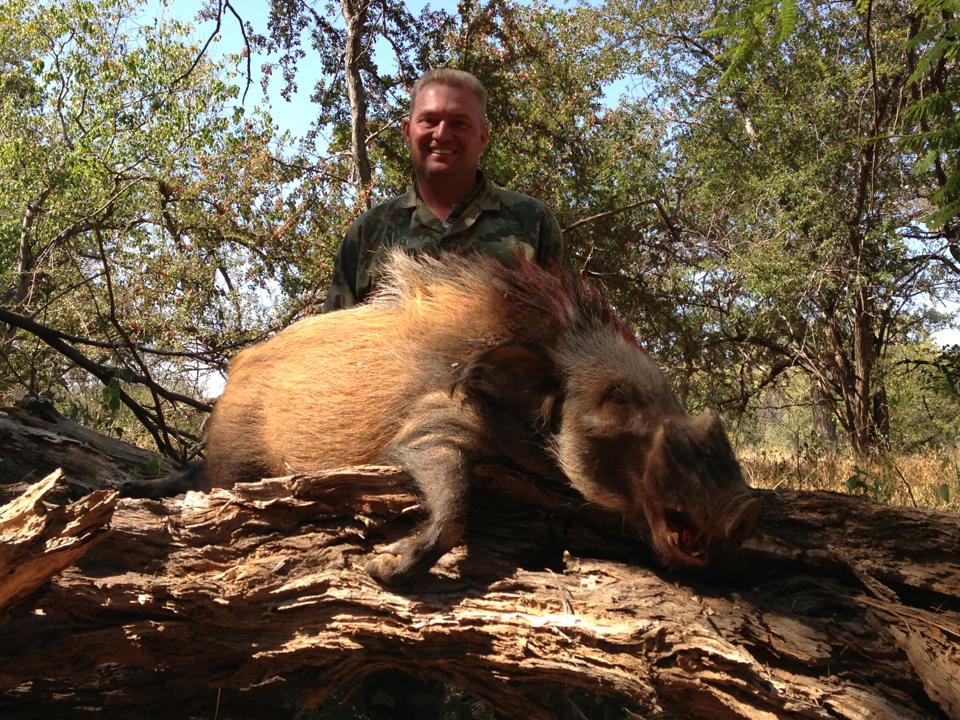 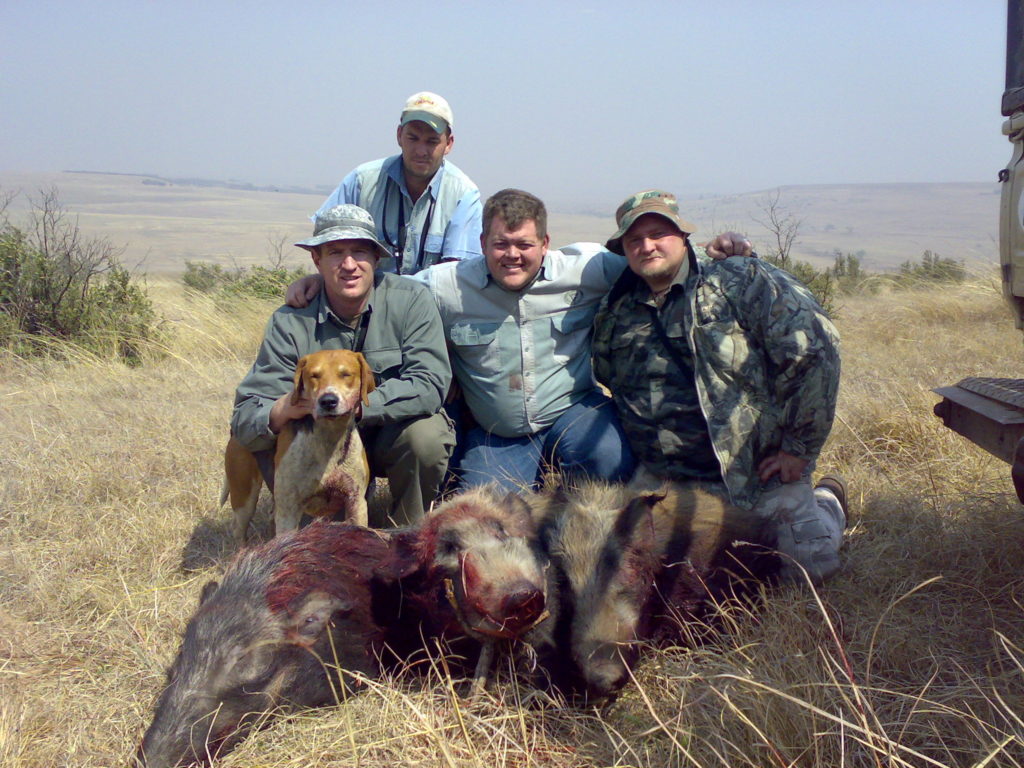